This year marks an important milestone in USTelecom history as we note the 120th anniversary of the association’s founding by a group of entrepreneurs who connected Americans across the country using little but thin wires. Our association has continued to evolve with changing times, convening telecom companies of all sizes and distinguishing itself as a recognized leader in policy discussions which could fundamentally alter the evolving telecommunications sector.

The industry may have changed dramatically in the last 120 years, but the association’s mission of promoting a pro-growth agenda and allowing telecom companies to focus on what they do best – connecting Americans coast-to-coast, across the hills, valleys and fields of our great country— has changed very little. 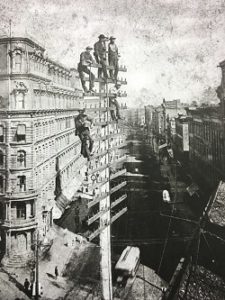 By the end of 1894, historians say roughly 80 new competitors had obtained about 5 percent of the phone market, mostly in areas where the Bell system wasn’t available. By the early 1900s, the number of competitors had grown to more than 3,000 and they began competing head-to-head in some markets. They touted $20 million to $30 million investments in exchanges in Ohio, Iowa, Illinois, Michigan, New York, Pennsylvania, and Indiana.

The Chicago meeting galvanized hundreds of local independent operators. Within weeks, the First National Convention was held in Detroit in June 1897. During the two-day meeting, the “National Independent Telephone Association” was born.

Many of our small and medium-sized members began as family-owned enterprises and remain independent today. In the early years, systems were built as a unit and outside connections required negotiated “intercommunication” agreements with other companies. 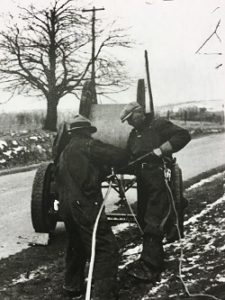 Even at that first Chicago meeting in 1897, toll charges were a concern raised by members. As the years passed, other regulatory issues cropped up, including tax legislation, accounting and reporting requirements, universal service obligations, mergers, pricing, patents and public safety concerns. Party lines were common in U.S. households for decades, which raised both privacy and eavesdropping concerns, until they were phased out in favor of private lines.

Throughout all of these industry shifts, the association has remained at the forefront of shaping communications policy at home and abroad.

Today, broadband is the engine that powers the global economy. It is expanding the how society connects more than newspapers, telegraphs, telephones, radios, and TVs combined. Ensuring an industry with a long-standing history of developing newer, better, faster ways of connecting customers has a sustainable path to deploying new technologies is key for future innovation and growth.

While the industry has changed dramatically over the year, USTelecom’s dedication to our member companies and our industry has never wavered. We still believe the embrace of light-touch regulatory policies will spur dynamic innovation and the investments needed to unleash ever-greater opportunities for our companies and consumers.

As we celebrate our 120th Anniversary, this is a great time to celebrate all that our members have accomplished in connecting communities across the nation. It is also an opportune time to look to the future, recognize all that is possible and embrace with humility the notion that, while none of us can predict the future, the nation’s broadband companies will chart a bright path forward. 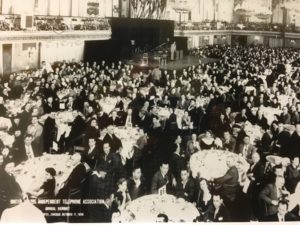 When USTelecom was the U.S. Independent Telephone Association at its annual banquet in Chicago, October 11, 1954.

How Providers are Helping Residents Impacted by Hurricane Michael