About 96 percent of Americans had at least one wired broadband option by mid-2016 and 84 percent had two options, according to a new analysis of Federal Communications Commission data by USTelecom and consultant Telcodata CensusNBM.

In a new report, “U.S. Broadband Availability Mid 2016,” USTelecom Vice President of Industry Analysis Patrick Brogan provides data that shows the availability and speed of wired broadband service have increased at all speed levels over the past six years and continues to grow. In addition, fourth generation mobile broadband has been deployed to almost all Americans from multiple providers.

The increasingly competitive state of broadband availability is the result of substantial capital investments by broadband providers in a dynamic, evolving market. Broadband providers have historically included the leading investors in U.S. domestic capital expenditures.

“This report highlights the success of broadband providers in bringing innovation to communities across the United States and upgrading speeds and availability to keep Americans at the forefront of the internet revolution,” said USTelecom CEO Jonathan Spalter. “We need to build on these successes by encouraging the FCC and Congress to embrace investment-friendly policies that will allow for future network growth.” 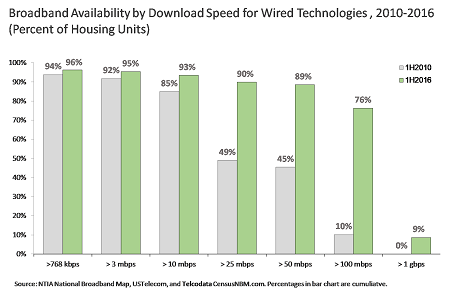 The data also shows that Americans are seeing more competitive choices for broadband service at higher speeds than before. In the summer of 2012, about 55 percent of U.S. households had access to wired broadband of download speeds of 10 Mbps from two or more providers. Four years later, that number had grown to 65 percent of homes. At the 25 Mbps speed level, the number of households with access to two or more providers more than doubled from 2012 to 2016, government data shows. 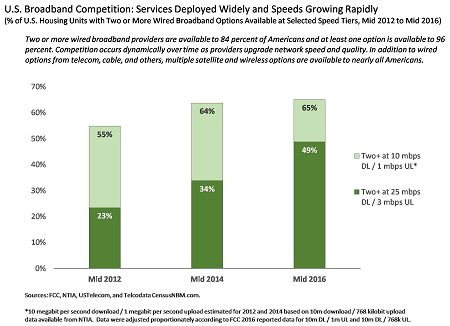 The FCC uses two definitions of broadband: 25 Mbps downloads in urban and suburban areas and 10 Mbps in more rural areas which are eligible for high-cost Universal Service Fund support. 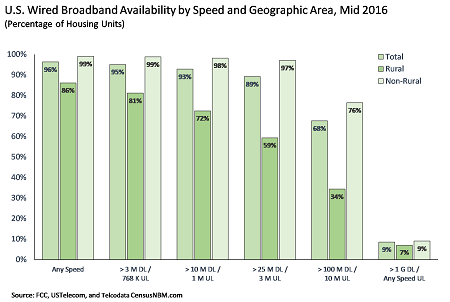 The FCC’s data shows variations across rural areas in terms of deployment, speeds, and competition. While there are gaps in rural broadband, there is no single “rural broadband gap.” Rather, gaps exist in specific rural areas either where broadband is not available because of challenging economics or where there is only one provider and either demand, industry technology trends, or subsidies are not driving sufficient upgrades.