U.S. internet traffic is projected to grow two-and-a-half times over the next five years, according to a new USTelecom analysis of annual Internet Protocol (IP) traffic data from Cisco’s Visual Networking Index, a continuation of explosive growth over the past decade. 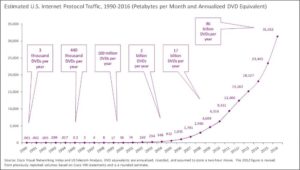 Over the last several decades, U.S. broadband providers have invested in world-leading networks that enabled tremendous internet traffic growth. U.S. attained leadership in internet usage with massive investment in broadband infrastructure, along with the development of compelling applications and content. Since the commercialization of the internet in the 1990s, U.S. firms have built an internet ecosystem that is the envy of the world under a bipartisan light-touch regulatory framework. The latest Cisco VNI data demonstrate that ongoing investment in broadband networks, including wireline networks, will be critical in sustaining U.S. momentum in IP traffic growth, maintaining U.S. international leadership and generating the economic benefits of increased migration to IP networks.

While traffic continues to expand, broadband capital expenditures have stalled and declined in the last few years. Annual broadband provider investment in 2016 was $76.0 billion, approximately $1.9 billion lower than $77.9 billion in 2015 and $2.4 billion lower than the recent peak of $78.4 billion in 2014. The Federal Communications Commission (“FCC”) in 2015 abruptly changed course and reclassified broadband providers as heavily regulated utilities under Title II of the Communications Act. This shift imposed burdens on and created uncertainty for network providers, putting pressure on broadband investment over time.

To accommodate growth in demand and enable long-term innovation in information and communications technology (“ICT”) for businesses and consumers, the U.S. will need to reignite broadband capital investment growth. The FCC needs to reverse its decision to classify broadband providers like utilities and return to a more investment-friendly policy climate that will encourage greater investment in broadband infrastructure, facilitate flexible business arrangements and sustain our international competitive edge.

Fixed communications networks are a critical component of the internet ecosystem, transporting nearly all of the ever-increasing volume of IP traffic that consumers and businesses generate. The overwhelming majority of traffic today and in the foreseeable future travels to and from end-users via wired access connections or Wi-Fi, which is essentially a very short-range wireless extension of a wired network. 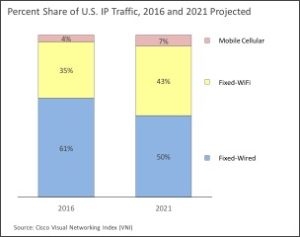 Meanwhile, as USTelecom projected in its previous analysis of the Cisco VNI data, the U.S. overtook South Korea in 2015 to become the clear world leader in IP traffic on a per capita and per user basis, and continues to expand its international leadership. 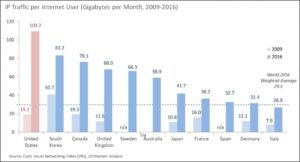